I swear that this year is passing at lightning speed. I can not keep up and too many things have been left un-blogged:
Another loom, Mirabelle, was given new life on Mother's day. Samm is off and running with her new weaving and some amazing paper self-spun yarn as weft. I look forward to when she shows me how to do that!
Winter is here with rain, lightning, thunder and a leaking roof. Enough said, will deal with that tomorrow when I ring up the roof plumber and then wait........
Craft camp (a week ago already), organised by Suzie, was a productive and much needed couple of days away. I had been feeling any trace of creativity has 'faded' away and that I really need to make something, anything as I have not really woven, knitted or sewn very much this year. Suzie pointed out this fabric (called Fade Away) to me a couple months ago at Tessuti. She said that I had to go and see it. In fact, I had seen it and decided that if I did not have a project for it, I was not going to get it. (You see I am trying to cut down on buying fabric and yarn this year, not very successfully I might add.) Upon second look, I figured it was the perfect thing for the New York cape. I have seen a sample of it in the shop and had seen a few of them made in blogland.
Jules and I did a sew-a-long and made hers out of Harris Tweed, complete with label that has the weaver's name on it! I can't wait to see her finished cape.
The fabric is amazing: a double weave with gradation of woollen weft from black to white with a mix of silk in the middle. I had a good look at the structure and will try to have a go at weaving something like it one day. I still have some scraps so will do a study of it then. 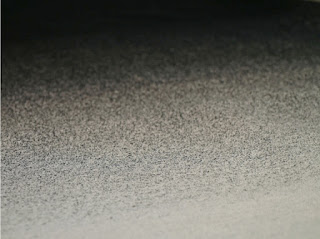 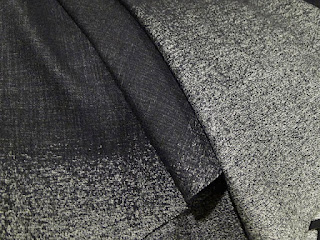 I think that this is the best use of the fabric that I can come up with to show off its beauty. As the fabric was reversible, I just managed to to cut out the pieces of the cape , less the front facing. Suzie, the most generous soul gave me enough from her piece to make the facing. I am forever grateful and relieved that I did not have to look for alternative fabric. 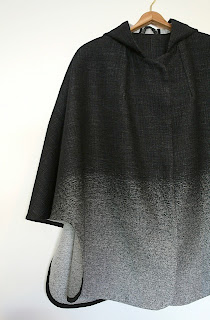 The original pattern calls for an exposed wool binding. I didn't want that dark outline around the paler section at the bottom so I made some binding out of some silk chiffon I had in stash. I turned the hem under with the binding and then hand stitched it down so that there was no exposed stitching on the outside. 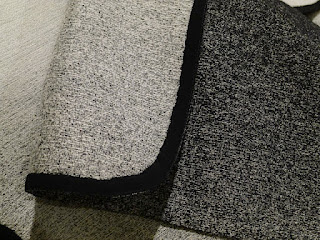 All the seams were bound with the silk binding (pattern calls for ready made purchased bias binding) as well but they are machine stitched. I was a bit confused as whether they were totally bound with bias tape or what is called Hong Kong finish. I think that the latter results in less bulk. 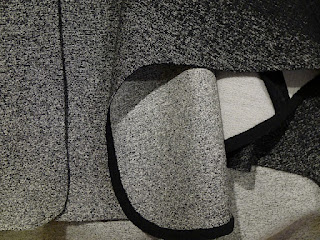 I also used sewn on 18mm press studs instead of buttons.
I felt like I had done this in a much more complicated method than what the pattern had intended. However, I think that the fabric itself dictated some of that. One good thing with having Tessuti in Melbourne was that I could try on their sample at the store before starting the project. There are probably a couple of technical things I would do differently but I like it that I learn something new with every project. A big thank you to Suzie and Lisa for all your help.
So bring on Winter, I am ready with cape.
Posted by sampling at 7:20 PM 7 comments: 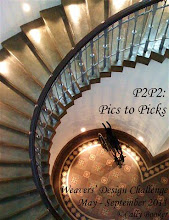